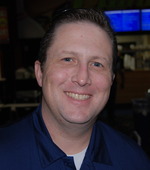 I have been Director of Bands and Music Department Chairman since the school opened in 1999, having previously taught as the Assistant Band Director at Vivian Field Middle School in the Carrollton/Farmers Branch Independent School District.

The Rice Raven Bands have consistently earned University Interscholastic League Sweepstakes awards as well as numerous Best in Class and Best in Contest awards at invitational festivals.  The Rice Middle School band has advanced to the Texas Music Educators Association Honor Band area finals seven times and was recognized as a State Honor Band Finalist in 2008, 2009, 2011, 2013, and 2017.  In 2012, the Rice Middle School Band was named the Outstanding Texas School Band Program by the Texas chapter of the American School Band Directors Association and was awarded the prestigious Sudler Silver Cup by the John Philip Sousa Foundation in 2014.

I have been married to my lovely wife, Cyndi, for 23 years.  We have two children.  Our oldest is a junior at Stephen F. Austin State University, and our youngest is a junior at Plano West.  In my free time, I enjoy fishing, camping, golf, home improvement projects, and motorcycling.

"Music is Love in Search of a Word"  -Lanier