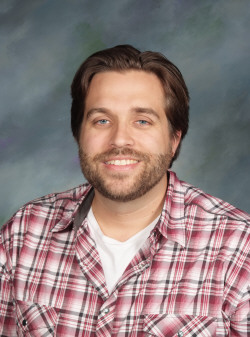 Russell Young was raised in Little Rock, AR. He earned his undergraduate degree in English with a focus on creative writing at Rhodes College in Memphis, TN. After graduation,  Russell started his teaching career in Memphis at a alternative school for students with special needs. During that same time, he also began working on his masters degree at the University of Memphis. In 2003, Russell and his wife, Annie, moved to Columbia, SC where they both enrolled in graduate studies at the University of South Carolina. After earning his Masters in Teaching, Russell took a position at Dutch Fork High School in South Carolina where he taught English for eight years. At Dutch Fork, Russell developed a film course, took part in school theater productions, and sponsored the Literary Magazine. The “Lit Mag” provided an opportunity to engage students in a variety of writing and creative expression projects; the student led group hosted a regular Open Mic Night where students and community members shared their works.  Each year, the group published a compilation of student writing.  A move to Dallas in 2013 brought Russell to the Plano Steam Academy where he has been able to integrate creative writing, English and studies of the Humanities more broadly into the growing curriculum.

Personally, Mr. Young enjoys spending time with his three young daughters and riding his bike all over the metroplex.