Vincent Huang Plano West Senior High School, was a top 10 finalist in the Regeneron Science Talent Search. Earning ninth place he received a $50,000 award for his computer model to better predict refugee migrations on a regional scale and tested his results using data from the 2015-2016 refugee crisis following the civil war in Burundi, Africa.

Vincent Huang of Plano West Senior High School was named a "Top 40" finalist in the 2019 Regeneron Science Talent Search (Regeneron STS), the nation's oldest and most prestigious science and math competition for high school seniors. His project is titled: Modeling Refugee Migration: Mathematical and Algorithmic Models of Refugee Crises. "Top 40" finalists were selected based on their project's scientific rigor and their potential to become world-changing scientists. Earlier in January, the "Top 300" scholars were selected from the nearly 2,000 contest entrants. Plano ISD had four students in this group, which included Vincent Huang. Read more about the "Top 300" scholars in Headline News. 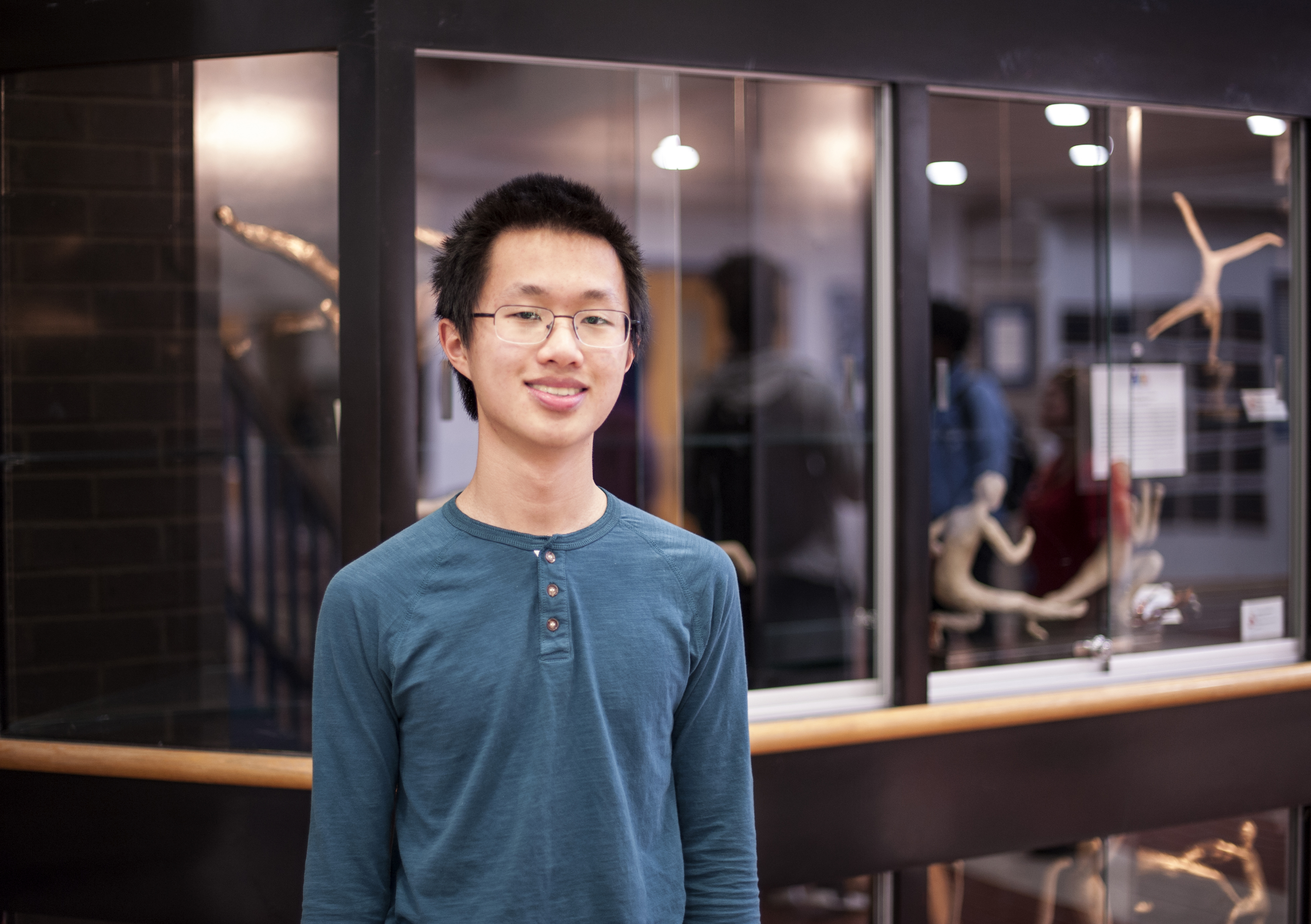 As a finalist, Vincent will travel to Washington, D.C. March 7-13, where additional judging will take place during the selection of the "Top 10" finalists. Finalists have the opportunity to interact with leading scientists, meet with members of Congress and display their projects to the public at the National Geographic Society on March 10. "Top 40" finalists are each awarded at least $25,000, and the "Top 10" finalist awards range from $40,000 to $250,000. The "Top 10" Regeneron STS 2019 winners will be announced at a black-tie gala awards ceremony on March 12. In total, more than $3 million in awards will be distributed throughout the Regeneron Science Talent Search.

About Vincent Huang and his Research

“Finding a starting place is nearly half of the work in a research project,” according to Vincent, and his interest in his research subject reaches back to his freshman year of high school as a result of the study of Ernst Georg Ravenstein's Laws of Migration introduced to him in his ninth grade human geography class. He also explored the Floyd-Warshall algorithm, and this preliminary work lead him to the decision that this was an area of research that he could improve upon by forming predictions based on the general movement of people and testing the predictions against actual real-life data.

Vincent is a product of Plano schools beginning kindergarten at Bethany Elementary. first–fifth grades at Mathews Elementary, Schimelpfenig Middle School, Jasper High School, and he will graduate from Plano West Senior High in 2019.

Vincent noted that his participation in the Plano ISD Math Rocks program during his fourth through eighth grade years helped to grow his interest in mathematics. The Math Rocks program seeks to identify and serve mathematically high performing students in elementary and middle school. Students qualify to participate in the program based on the district-administered MAP assessments, which is given to all students. In middle school, Vincent participated in the Schimelpfenig MathCounts club and competed in local and state level competitions. During his eighth-grade year, Vincent’s MathCounts team placed fourth in the state of Texas. At Plano West, Vincent is currently in Multivariable Calculus, a dual credit math course through Collin College, which is available to Plano ISD students who have completed AP Calculus BC with an AP exam score of four or higher.

Plano ISD Secondary Mathematics Coordinator Whitney Evans has this to say about Vincent, “I’ve had the pleasure of supporting Vincent’s participation in the MAA American Mathematics Invitational Competitions. As a result of his participation in these MAA competitions, Vincent was asked to represent the U.S. as part of their International Math Olympiad team in 2017 and 2018. Watching Vincent complete these rigorous series of math tests has been such a reward. Even with his high aptitude, Vincent continues to grow as a mathematician through his perseverance and determined approach to learning.”

Mr. Carroll describes Vincent, "as an extremely bright student who brought his high-level thinking skills in mathematics and the sciences, his passion for learning new things and a sense of humor to AP Physics. He asked questions, searched for answers, stepped up to the challenges and raised the bar for all students in the class. Vincent would enter the classroom each day with a loud 'Hello Mr. Carroll.' To this day he still calls out 'Hello Mr. Carroll,' when he sees me on campus."

Julie Tallant, Plano West guidance counselor, describes Vincent as, "a curious, motivated, hardworking student who desires to make a meaningful impact on his community. On the surface, he has a serious and intelligent demeanor, but internally he is a warm and humorous person who seeks to gain a broader perspective and open dialogue with the world. He searches for knowledge and truth, and he holds himself to a high standard to pursue his goals. When a topic interests him, his curiosity pushes him to learn all that he can to master it. This has been the driving force behind many of his achievements: USA Math Olympiad Team, Siemens Foundation Competition semifinalist and All–State Orchestra. Vincent is passionate about math! He has represented the USA twice at the International Math Olympiad, earning first place this last year with his team, as well as earning a personal gold medal. But even more impressive than his amazing skills and talents is his ability to share his knowledge with others. He has spent the last five years teaching math to students in the community, as he helped found a club designed to teach math to younger students called Magic Math. He has made an impact, while developing patience, leadership and perspective on how other people process information and learn. Additionally, he spends his free time answering questions on the “Art of Problem Solving” an online discussion forum – amassing over 3,000 posts over the last years, helping to nurture this cooperative online math community. Clearly part of the academically elite, Vincent is also a good human being with an approach to school that is a breath of fresh air. He not only wants to learn – but wants to share that knowledge with others, whenever he can.”

Vincent’s advice for other student researchers is to find what really interests you, so as you work intensively over time you don’t give up. And he recommends finding help with the research process from someone experienced in methods of researching. He noted that a research mentor does not have to be an expert in the same subject area, but acts as a guide in the process of research.

“This year’s Regeneron Science Talent Search finalists are helping to advance solutions to some of our world’s most intractable challenges,” said Maya Ajmera, President and CEO of Society for Science & the Public and Publisher of Science News. “I’m so impressed by the hard work and brilliant thinking these 40 exceptional students have demonstrated in their research projects. I look forward to meeting them in D.C., and I am excited to see how their passion for science will impact our world.”