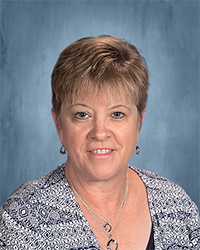 Mrs. Taylor is a proud native Texan.  She has been in Plano since she was two years old, so she grew up in Plano ISD.  After graduating from Plano Senior High School, she attended and graduated from Southwest Texas State University.  Mrs. Taylor returned to the Dallas area after graduation and taught in Garland ISD for 2 years.  Realizing that her heart was still with Plano ISD, Mrs. Taylor came home and started teaching 4th grade at Shepard Elementary. While teaching at Shepard, Mrs. Taylor worked on and received her Masters degree.  After leaving Shepard, for 2 years, she taught PACE at Wells and Davis Elementaries.  In 2000, Wyatt opened and Mrs. Taylor began teaching third grade and then later moved to fifth grade.  She feels very blessed to have been a part of such a great school like Wyatt since it opened.

Mrs. Taylor and her husband Phil, have two sons Brady and Brock.   The Taylor family is huge baseball fans with both sons having played baseball all their lives and into college.  Her family enjoys watching and playing baseball and spends many of their vacations visiting major league baseball parks around the U.S.  Other than watching baseball, Mrs. Taylor enjoys shopping for bargains, decorating, watching HGTV, and spending time with her family and friends.

Mrs. Taylor cherishes every child she has taught, and she is proud of the many accomplishments her current and former students have achieved.