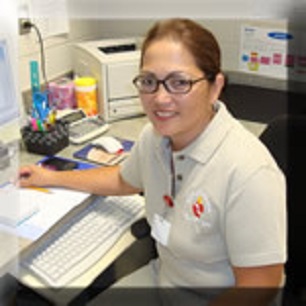 Mrs. Manglona is the Food and Nutrition Services Manager at Andrews Elementary.  She joined our staff in 2009. She holds several certifications including ServSafe and as a Level 3 TASN (Texas Association of School Nutrition) in school nutrition.  She earned her Associate of Arts in Business Management at Northern Marianas College in Saipan (on the Mariana Islands), and a diploma in Business Management from Western Business College in Portland, Oregon.

Mrs. Manglona moved to Plano, Texas in 2005 and was working at Jasper High School as Cashier/Cafeteria Specialist while training as Assistant Manager.  Prior to moving to Texas, she was a Resident Director at Rota Health Center on the island of Rota in the Mariana Islands.  She also completed trainings in “Bioterrorism & Health System Preparedness, Disaster Preparedness” in Guam, “Bioterrorism Preparedness and Response” in San Diego, California, and took part in hiring doctors and nurses for the hospital on the island.

Mrs. Manglona was born on the island of Saipan, Mariana Island (US Territory).  She has been married to Benjamin for 28 years, and together they have five children (4 girls and 1 son - ages 18-27).