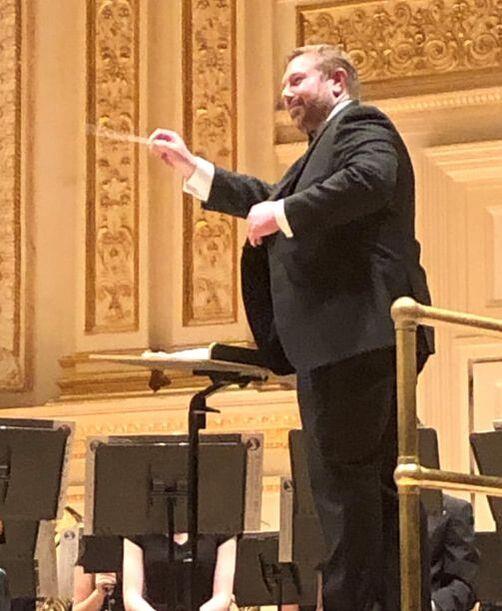 Mr. Kurzweil’s responsibilities at McMillen High School include conducting the Wind Ensemble, co-teaching the Concert Band, and team-teaching the Symphonic Band and the “Golden Roar” Marching Band. Bands under Mr. Kurzweil’s direction have been awarded superior ratings in UIL Marching, Concert, and Sight-Reading contests and have been named “Outstanding in Class” at various music festivals around the state. In 2015, the McKinney North Marching Band performed at the Texas 5A State Marching Contest. In the 2018, the MNHS Band earned 1st place in Music Performance at the US Bands Southwest Championship at AT&T Stadium. Mr. Kurzweil’s students have earned success at the All-Region and All-State level, and earned outstanding performances in solo and ensembles at district contests. Under his direction, the MNHS Symphonic Band was a Foundation for Music Education “Citation of Excellence” winner in 2016 and 2018.

During his undergrad years at Texas Tech, Mr. Kurzweil was a clarinet student of Dr. David Shea and had the privilege of performing with the Symphonic Wind Ensemble, Symphony Orchestra, Clarinet Choir, Jazz Band III, and new music ensembles. He served as Drum Major for the Goin’ Band from Raiderland under the direction of Keith Bearden and performed with the Court Jesters Basketball Band for 5 years. Additionally, he performed with the Lubbock Symphony Orchestra on bass clarinet for three seasons. While at SMU, Mr. Kurzweil had the opportunity to learn from mentors Brian Merrill and Lynne Jackson.

Mr. Kurzweil has performed on bass clarinet with the Lone Star Wind Orchestra since their inaugural year in 2006. The LSWO performs a few concerts throughout the year in major performance halls in Dallas and Richardson. They have performed in San Antonio at the Texas Bandmasters Association conference, the Arkansas Bandmasters Association conference, the Midwest Band and Orchestra Clinic in Chicago, and World Association of Symphonic Bands and Ensembles (WASBE) in San Jose, CA. The LSWO has completed multiple recording projects which can be heard on iTunes and Spotify. The Lone Star Clarinet Choir has performed in Norman, OK and Austin, TX. Mr. Kurzweil serves as a sectional teacher and and has performed in side-by-side concerts with the Lone Star Youth Winds yearly.

As an active clinician, concert and sight-reading adjudicator, solo & ensemble judge, and performer, Mr. Kurzweil has had the opportunity to work with directors and students all over the state of Texas.